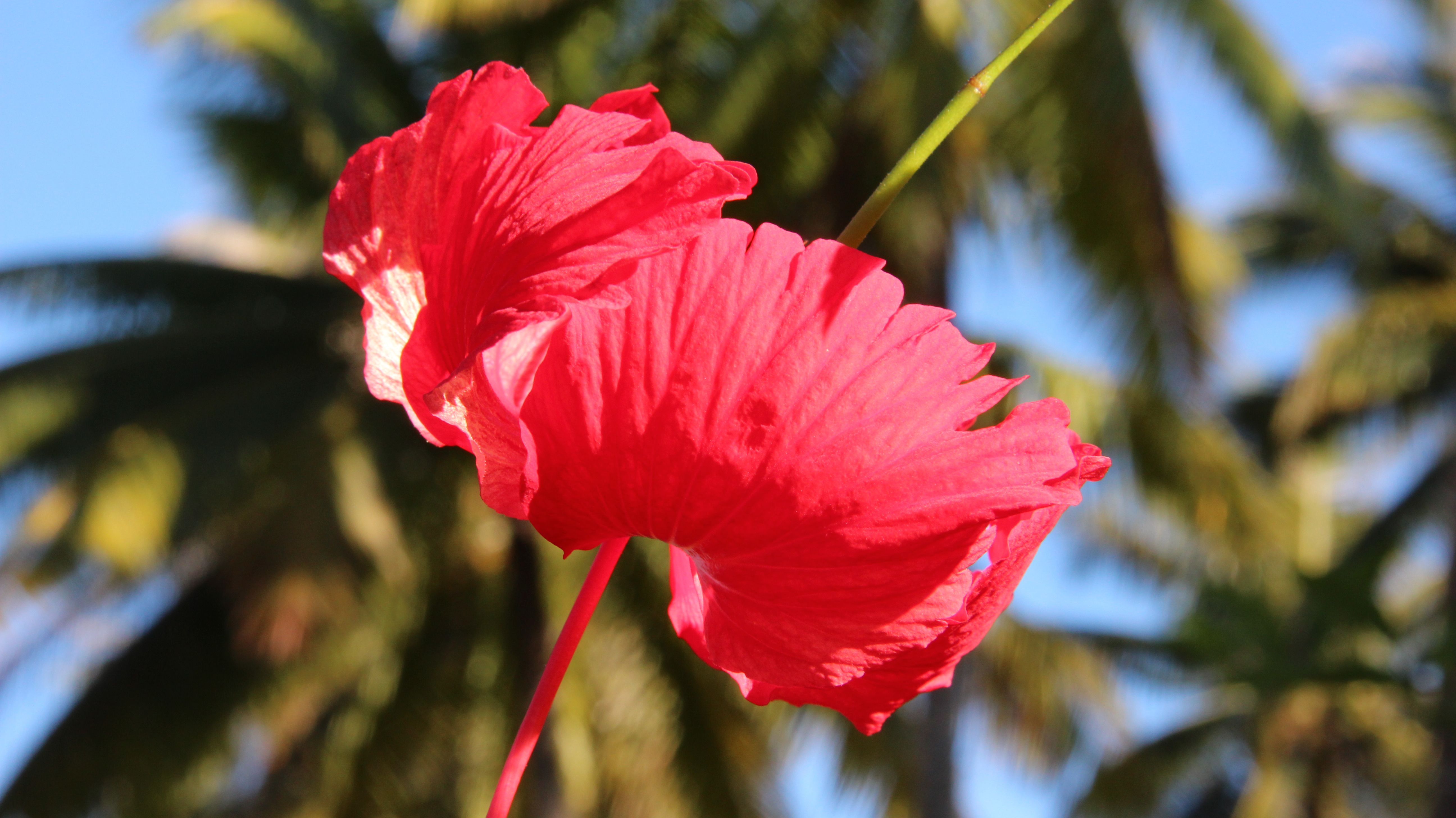 Tahiti and the high islands owe their reputation partly to their luxurious, tropical vegetation that fascinates the visitor.

A visit to numerous parks and botanical gardens (on Tahiti, Moorea, Huahine, Tahaa or even Ua Huka) is a veritable journey of discovery of an extraordinarily opulent flora.

During his migrations, man introduced numerous, useful so-called 'traditional' species, these being for food production, textiles or medicine. Settling in the archipelagos, the first Maori brought a fine selection of edible plants such as the coconut, the mape (Tahitian chestnut), the uru (breadfruit tree) and the yam that originated in Indo-Malaya, as well as sugar cane, banana trees and the Cytherian apple tree. The first missionaries also brought new and useful plants (tamarind, lemon tree, avocado, vanilla, mango tree etc.) as well as ornamental flowers. The Polynesian pharmacopoeia, based on plants, includes numerous raau (remedies), still passed on from generation to generation in families. Moreover, the use of certain species as building material is widespread in traditional architecture: bamboo structures, coconut tree trunks, roofing with niau, plaited coconut palm leaves or pandanus (screw pine). On the mountainous islands, the vegetation is terraced depending on height, winds, soils, sunlight and rainfall. The nearby plains are home to coconut palms and various species of trees (aito, tipaniers, mango trees, tamanu). The valleys present a varied flora due to the cultivated land and widespread irrigation. As for the plateaux and hilltops, they shelter many indigenous species (tree ferns and numerous endemic shrubs). Whereas the high islands have 1000 different species, the low islands (atolls) only have about a hundred due to the influence of the winds and sea spray. The most usual are the tou, the coconut palm, the fara (pandanus), the nono and the miki miki.

Flowers: the art of living

Flowers form part of Polynesian life and culture.From the time they arrive at the airport, travellers are welcomed with scented, colourful necklaces. Custom also dictates that the tiare necklaces are given on the traveller's departure to wish them luck. For plant preservation reasons, the seashell necklaces have replaced the flower necklaces. Flowers symbolise festivities, pleasure and rebirth. Surrounding the Papeete market, the mama prepares the crowns of flowers that the Polynesians wear on special occasions such as weddings, or simply for an evening with friends. Flowers are the basis of many Polynesian myths. The tiare maohi, these days called the Tahitian tiare to make clear that it differs from the word 'tiare' that means 'flower' in general, was allegedly created by the god Atea with the help of Tane, god of Beauty. At the time of Polynesian ancestors only kings and princes could gather this sacred flower. Later the tiare alone was used as a symbol of love. When Polynesians marry, the house and the bed of the young couple are covered with beautiful flowers for 30 days. The scent of the flowers allowed the young couple to find the secret of plenitude from the god Atea. Today, the Tahitian tiare is still the symbol of love - worn above the left ear it signifies that one's heart is taken but worn above the right ear that the heart is available for taking…

Coconut, the fruit that does everything!

The coconut palm is both a symbol of Tahiti and an essential resource for its inhabitants. In fact the precious nut that it produces has two strings to its bow - its milk that is deliciously refreshing and quenches the thirst and its flesh, that once grated and pressed that gives a scented milk that is used 'for all occasions' particularly in the preparation of the famous 'raw fish with coconut milk'. At a more mature stage the flesh of the coconut becomes copra and this time is used in the preparation of cosmetics, such as soap, shampoo or monoi. Finally copra oil has been discovered to be an excellent bio-fuel and could in time find its place in the world of renewable energy.

Closing of our services

During this period, no tours will be available. We apologize for this situation. We will be happy to welcome you back to make you discover the Sacred Island and its lagoon from November 21, 2022.

You can book a tour before this date by clicking here.